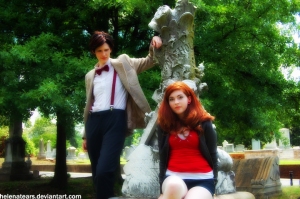 Another Amy costume! I do love this one though… It was a great idea at first, but wearing that sweater and jacket in an Atlanta summer was just brutal! This shoot we did as a fun thing this past summer, just a few friends! My friend Lindsey Lewis does and awesome 11th Doctor, and doing this shoot was a such a blast with the pair! You’ll see her pop up in a few other Amy photos as well. 😀

This costume is another one that was relatively easy to put together. The shorts and boots were things from my closet, as well as the blue cami underneath. The jacket was a mall find that I altered and added fur to to be accurate to Amy’s in the show. Her sweater was a challenge though. It was a lace knit sweater, but I wasn’t able to find one in the summer heat of Atlanta, so I got this thrifty alternative and did some hand sewing work to simulate the lace detail in the neckline of her top. Hopefully when I have some shopping time, I can look for a better one!

Image of the Week: